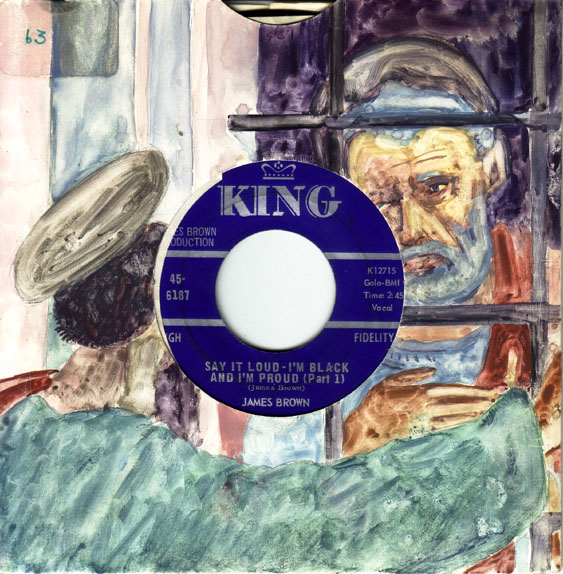 Released with two slightly different titles but the same catalogue number, the other title being Say It Loud - I'm Black But I'm Proud. By chance I am putting this up on the day that the first black president of the United States of America is sworn in. When I started this site back in 2002, the idea that a black man could be the President of America was still as remote as it was when James Brown cut this seminal piece of musical history in fact I doubt anyone except Obama himself was even thinking about it, and I doubt even he was. Say It Loud - I'm Black And I'm Proud was released in 1968 the same year as Martin Luther King was assassinated an act which unleashed a torrent of pent-up anger amongst, mainly, younger African Americans, resulting in violent protests throughout the United States. 1968 was also the year that Shirley Chisholm became the first black woman elected to congress, also that year Eldridge Cleaver had published his book Soul On Ice, and sprinters Tommie Lee Smith and John Carlos made their protest against racism by giving a Black Power salute when accepting their medals at the Olympics in Mexico City. It could be said that the position this record represents is primarily one of assertion, and as such clearly marks a stage in the time line of emancipation for the African American who was previously held in slavery. The election of the first Afro American to the highest office is without doubt an event of profound importance, in a period of the profoundest changes in social and economic changes affecting the most fundamental aspects of life. What all the diverse and far reaching affects of Barack Obama as president will be is hard to predict, but one thing, as I have already suggested some months ago when I put up Free and People Get Ready, is that all the songs that dealt with and were in some way instrumental in that trajectory of emancipation for the Afro American in the US, and now possibly elsewhere, have lost at least some, if not all, of their specific relevance. And while they often still remain works of the highest aesthetic musical and spiritual quality, and where appropriate still maintain their transcendental quality, the moral and political message has been sacrificed on the alter of success. Take the lyrics of say Curtis Mayfield's Keep On Pushing, where he sings "Till I Reach that higher goal" or Syl Johnson's "Something is holding me back" from Is It Because I'm Black, or Were Gonna' Make It from Little Milton to name a few of the most obvious. As I sit writing this with my 1999 copy of The Schomburg Center African American Desk Reference book I wonder where their time line of achievements in Politics and Civil Rights will go after they add, in their new edition, the category : President.