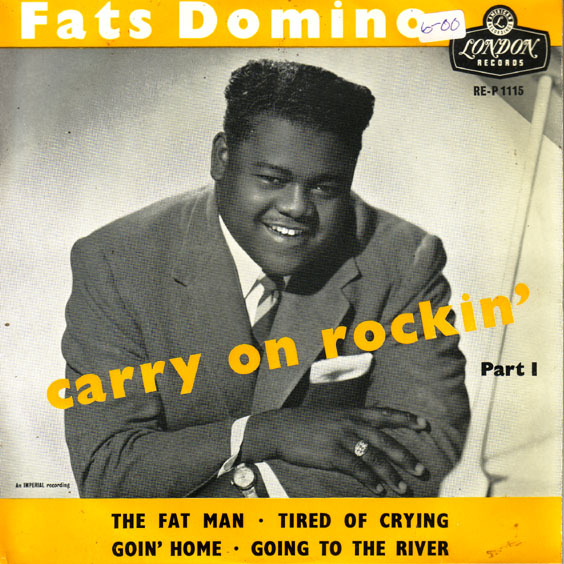 Going Home is a slow Blues that speaks of a yearning for another life, a better life, that possibly exists elsewhere, that place being in this song 'home'. Released in the UK in 1958 this EP (extended play) was the fifth of seventeen EPs issued in Britain by the man Fats Domino. All four tracks on the record were from the early 1950s and all had not been issued in England as single play either on 78 or 45rpm*. It was Fats Domino's fourth Imperial release in the US #5180 and was originally backed with the up-tempo track Reeling And Rocking. This music was at the time the height of street hip, the sound and the style, even the language was new. The picture of Fats Domino is of a young man who is setting the trend, an image that many other young men would have adopted as there own; here was a successful young man clean cut with an open and cheerful expression, life was good and he was telling others to forget their troubles for a while and enjoy it. Even the word 'Rockin' in the early 1950s would have signified to a whole generation that this was for them, and any others prepared to come on board. Of course the flip side of this Joie de vivre is song like Going Home which give a profound balance to his hip street culture repertoire, these somber Blues tracks with a more introspective take on life make concrete the balance needed in art as in life with the two sides of his records.

*rpm = revolutions per minute, was the distinction that was used, along with measurement, I.e. 7" 12" (" = inches) to categorize the various recorded music formats in the 20th century.