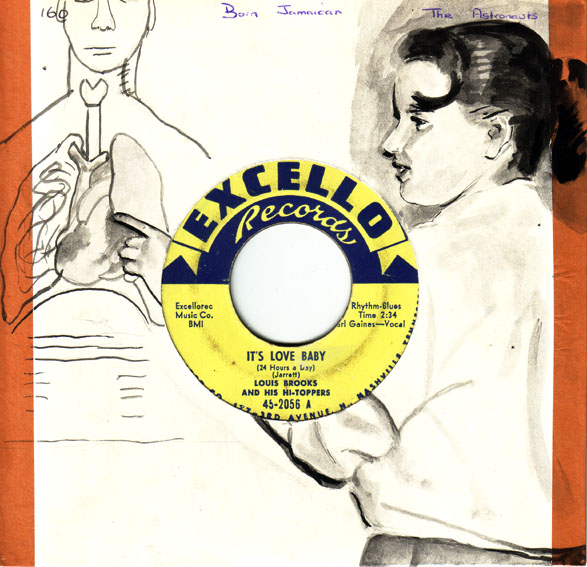 It's Love Baby was Earl Gains debut recording and also his biggest seller, but what should have been a good launch to his career came to little because the record was, to all intense and purpose, perceived to be by Louis Brooks And His Hi-Toppers, and it was in fact them who got the credit. To add to the problem for Earl Gains he only appears on one side of the disc, and even though It's Love Baby had sold well on the strength of the vocal, this unfortunate state of affairs was continued on his next Excello release Can't Keep From Crying #2063. His first solo release came on Excello 2072 It's Drivin' Me Mad but he was unable to repeat the success of his debut recording; the following year he was back as featured vocalist with Louis Brooks And His Hi-Toppers with Please Understand # 2088. In 1962 Excello released It's Love Baby coupled with Please Love Me under his own name but it was too late the moment had passed; he went on to record for many other labels, but with little commercial success, including: De-Luxe, Athens, Apex, Champion, King, Hit, Hollywood, Poncello, Seventy 7 and Hanna Barbara, until, it is said, he left the music business and found employment as a long distance lorry driver.