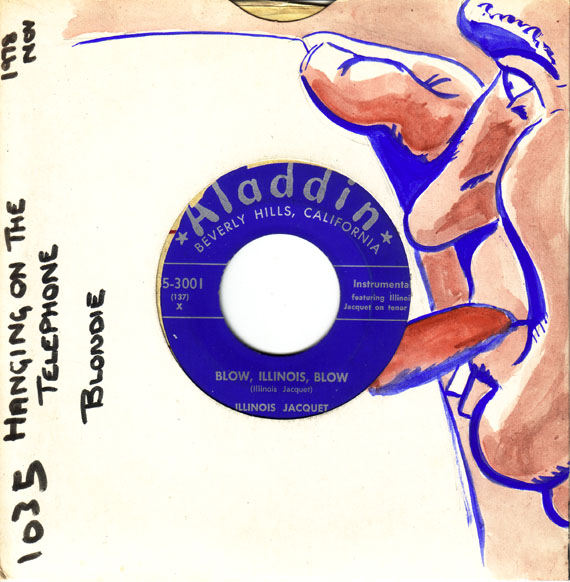 Jean-Baptiste Illinois Jacquet was born in Broussard, Louisiana His father was a French-Creole and his mother a Sioux, when he was just nineteen years old he was playing saxophone in The Lionel Hampton band. He became a pioneer of the honking tenor sax and it is his memorable solo on the Flying Home -the best and most famous version recorded for Decca on May 26, 1942 -  it is one of the first times a honking sax solo was played on record; a tour de force in honking and wailing which served as the template for almost every R&B sax player that followed. During the late 1940s after playing with Cab Calloway, Nat Cole and  Count Basie, and backing many top vocalist's on record, including Lena Horn, Ella Fitzgerald and Billy Holiday, he started to record under his own name with self-led groups for a variety of labels including Apollo, Aladdin, Coral, Decca, and RCA. The above was the second release of the newly launched Aladdin 3000 R&B series launched in 1947 that was to run for thirteen years up to Aladdin's demise in 1960 with a total of approximately 468 releases. Blow, Illinois, Blow would have originally been issued as a 78 rpm only, the above 45 is probably from the mid 1950s.