When The Clarendonians cut this 'Rude Boy' song for Coxsone Dodd they were young men riding a wave of popularity while in the West Indian media the 'Rude Boys' of their song were riding a wave of popular notoriety. The youth, mainly from the ghettos of Kingston, who were rebelling and grabbing all this media attention, were reluctant to accept their prescribed lot; a future which for many was bleak even by Jamaican standards. The lurid and graphic stories of this wayward youth written in the popular press, were lapped up by a bourgeois public eager to be either titillated or to have a scape-goat and therefore avoid responsibility for any fault in their society, or just to vent their envy and frustrations on the young.

Yet, unfortunately, many of the those acts by the Rude Boys were violent and damaging; they were, as a movement, unfocused and unorganized, and instead of channeling their energies into positive and constructive channels, they, as usual, attacked and harmed only those who were of no importance. Some of those young were fortunate enough to be able to escape (temporally) their oppressive and unjust surroundings, by one of the then few pathways available out of the ghetto: music. Being from the same or similar backgrounds as the Rude Boys many of these musicians and singers were able to comment critically on the situation with understanding and compassion, trying, in many songs, to reach out to their ghettos kin with the option of an alternative standpoint.

NB. Rudie Bam Bam was also pressed with a push out center (see below) 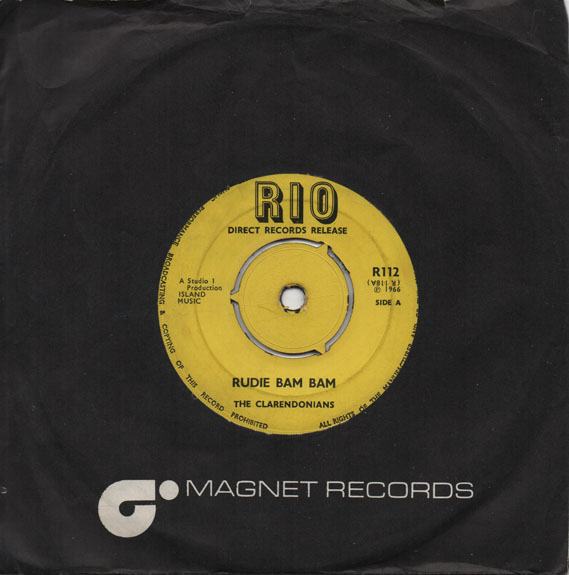