Zing Went The Strings Of My Heart this dynamite ballad with an up-tempo beat is the flip side of Yakety Yak, and is a bit of an anomaly for The Coasters who's releases were normally, if not out-right novelty songs, they were at least mini narratives of humorous kind. Zing Went The Strings Of My Heart is a conventional love song that's full of the most delightful vocal acrobatics, and it seems such a waste that the group never cut more like it. The mellow bass lead is sung by Will "Dub" Jones followed by Cornell Gunter singing those beautiful high notes, then there's the great silky Sax solo and fade out by King Curtis.

Zing Went The Strings was also recorded to good affect as a Soul cut by The Tramps in 1972. Written by James F. Hanley in 1935 the song first saw the light of day in the Thumbs Up stage revue that same year. It is also said that it was the song Judy Garland sung in her audition at MGM; it was certainly sung by her in the 1938 film Listen Darling and recorded by her for Decca in 1939.  It is also, apparently, the favorite Doo Wop record of all time by Jerry Leiber and Mike Stoller - who produced it - claiming when they nominated it "that it sounds the least like a DooWop record"!

Although 45 records were not new in the UK in 1958 when this was released it was around this time that the record buying public had started to switch on mass after which record sales of the 78 RPM discs began to diminish rapidly. Zing Went The Strings Of My Heart, or rather, Yakety Yak, was bought in quantity on both the 78 and 45 RPM (see below) 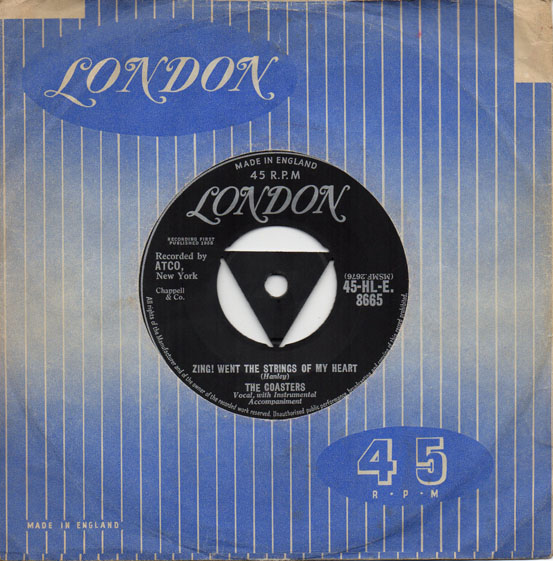