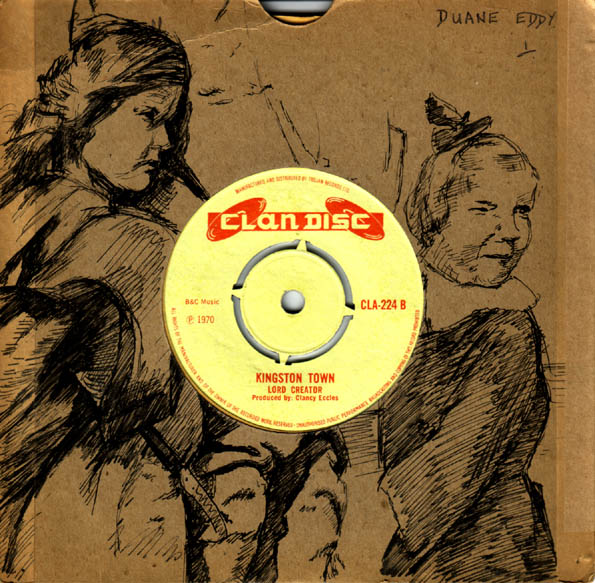 Lord Creator, a.k.a, Kentrick Patrick, singing of his affection for Kingston Town, the capitol city and principal port of Jamaica. This song suggests, to me, how, in the early days of the British Music Hall's, the song Maybe it's because I'm a Londoner could have sounded, delivered, as it must have been then, sincerely and unselfconsciously as just another popular song. Kingston has not always been the Capitol, or the principal port of the island, the original capitol, when the English 'inherited' the island from Spain, was Spanish Town, thirteen miles inland and westwards from Kingston. Until the earthquake of 1692, the Port Royal, which is now only a shadow of former itself, was the principal port, referred to in the late seventeenth century as "Babylon of the West", and, "A gilded Hades where Mammon held sway". Because of three further disasters affecting Port Royal:  the partly reconstructed town was burnt down a few years after the earthquake, a hurricane demolished it again in 1722, and another fire in 1816, the inhabitants abandoned it for Kingston. Kingston grew rapidly and in the 19th century the seat of government was officially shifted there, and Kingston has remained the political as well as the maritime and commercial capital. Although he was born in Trinidad, Kentrick Patrick moved to Kingston in the early 1950's where he enjoyed success as a calypso singer and later as ballad singer and Ska vocalist. He cut this memorable tune for Clanncy Eccles, and the story goes that towards the end of his life after Kentrick Patrick had become a homeless vagabond, he was spotted destitute on the streets of Kingston by Clancy Eccles, to whom he  owed $30, when Eccles called out to him Kentrick fled thinking that he had come to collect his debt, Clancy chased him and eventually cornered him and gave him the good news that his tune Kingston Town had been used with great success by the British group UB40, and that he, Kentrick, had substantial royalties to collect. Kentrick also did a terrific, slightly faster, version of this song where the word Kingston is replaced by Babylon!